This is an excerpt from an article in  AutomationWorld, featuring Dave Olson, controls engineer leader for RedViking  - By Grant Gerke , Automation World Contributing Editor, on July 6, 2017 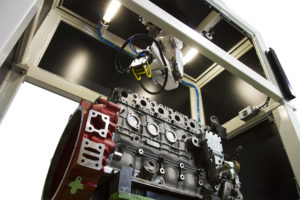 Digital transformation—or Industry 4.0—is taking hold in many industries, but some analysts point to the automotive industry as the catalyst for industrial maturation. After the downturn, automotive OEMs began to consolidate factory footprints and look inward to processes and optimization for their survival. This optimization led to increased use of manufacturing execution systems (MESs), better asset utilization and a concerted drive toward advanced automation. This trend, along with increased production volumes, are spurring automotive OEMs to invest in line improvements. As part of this industry trend, a diesel engine OEM recently turned to Plymouth, Mich.-based system integrator RedViking to design and install a vision-based inspection system for an engine assembly line. Because of large-volume production, the diesel engine supplier needed to eliminate its manual inspection process at a critical stage of the assembly line.

“Assembly line operators were responsible for inspecting valve assemblies and overlooked problems due to watching thousands of engines move through the area in a shift,” the automotive supplier notes. The diesel engine supplier eventually realized that the possibility of faulty assembly rose exponentially toward the end of a worker's shift. Operators are tasked with inspecting each crosshead and rocker arm assembly to ensure that all components are present. They found that, late in the shift, the diesel engine showed crossheads, crosshead sockets and push rods fitting loosely together. Alignment is critical during this phase because these components will become obscured as the diesel engine assembly process moves forward down the line. The valve assemblies within the engine include two intake and exhaust valves per cylinder, as each rocker arm controls two valves. The rocker arm applies a force to the center of the crosshead while a top crosshead socket acts as a pivot that enables the two ends of the crosshead to each transmit force to a valve stem.

Valves, arms, sockets and other components create an intricate puzzle to inspect at a crucial stage on the assembly line. “The simplest approach would have been to use a coordinate measuring machine (CMM), but we determined that we would need to touch at least 24 different positions, multiple times in most cases, and within the required 45 seconds,” says Dave Olson, controls engineer leader for RedViking. Engineers at RedViking also looked at 3D and 2D laser scanning; the latter would be too costly to implement, though it did meet the cycle time requirements.

Instead, RedViking combined a six-axis robot from Fanuc with a machine vision system attached to an end effector to inspect these multiple engine components.

“To successfully implement this machine vision solution, we needed to overcome several challenges, including the fact that the parts lack location preciseness, are all about the same color and lighting varies in the plant,” Olson says. The integrator chose the Cognex In-Sight 7000 vision inspection system to examine anywhere from eight to 24 different positions in the allotted 45 seconds during the inspection stage. The IP67 sealed vision system can achieve these cycle speeds with 7.2 GB of program memory while having a 512 MB image processor on board for the critical vision needs with this application. For example, the timestamp resolution can achieve 8 ns and synchronization accuracy is 5 μs. One of the key enablers for the vision system is the PatMax part location tool, which uses a geometric pattern-matching technology to learn an object’s geometry—such as the crossheads and sockets—using a set of boundary curves. Using PatMax, RedViking designed components arranged in acceptable and unacceptable spatial relationships and, by capturing more images with the vision system, defined specific ranges for acceptable parts. The inspection station uses a Rockwell Automation CompactLogix PLC via a PanelView HMI to control the six-axis robot and vision system. In RedViking’s implementation, the system control first identifies the specific engine model and variants to the operator’s HMI at the inspection station. Inspection includes limiting the natural lighting during the process and capturing side view images of the two rocker arms and crossheads for each cylinder. Then the matching tool determines the location of a known reference point on the engine and uses it to inspect the image. From there, the pattern matching verifies the presence of the engine components and determines whether their location and orientation fall within previously defined acceptable limits. After the crosshead and socket inspection, the robotic arm moves to the other side of the engine and examines the pushrod sockets in a similar fashion. At the HMI panel, operators view the newly scanned engine shots against a correct schematic of the engine via an overlay presentation. Green represents a pass and red indicates a defect. The station’s PLC either moves the engine forward if it passes or diverts it to a separate repair station from the assembly line. A local PC on the network saves the images generated during the inspection process and identifies each image with time, date and engine serial numbers. The images are used by engineers to investigate the causes of failures at later stages of the production process or in the field. With production volumes and capacity utilization increasing in plants, automotive OEMs are finding creative ways to meet demand and keep rolling engines off assembly lines.