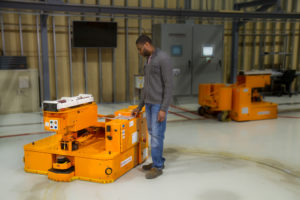 We’ll install more assembly line automated guided vehicles (AGVs) in the first half of 2017 than we installed in the preceding two years. The AGV floodgates have opened for manufacturing, and it’s worth taking a look at what’s behind that.

There’s a sense that the global economy is changing at an increasing rate. Almost overnight, markets can dry up, products can require a redesign, and technologies can advance. There’s a strong demand in manufacturing for systems that can respond quickly to those changes. With pits, chains, and miles of metal track, traditional conveyance doesn’t offer flexibility in paths, processes, or products. AGVs provide flexibility in all three types of change:

For years, AGVs weren’t considered practical for manufacturing because of unpredictable battery life, but today there are alternative power sources that make AGVs a true 24/7 conveyance option.

No one wants to Overbuy

Product launches often entail some type of ramp-up, with limited initial production preceding full throughput rates. With traditional chain-based conveyance, manufacturers essentially have to buy all the conveyance they’ll ever need, before they really need it. It’s generally not practical to install part of an overhead power and free track, or just a few skillets. Instead, they have to make the full conveyance investment at the start of the project, even if they won’t be up to capacity for some time. In comparison, AGVs allow a staged investment. Companies can buy only the number of AGVs they need for initial launch, adding AGVs as they increase production rates. This approach reduces capital outlay, lowers risk, and better aligns production expense with revenue.

We live in a world of product customization, and customers have high expectations about product variety and improvements. If we stopped seeing a new iPhone once a year, we’d be surprised, and if we could no longer choose from an increasing selection of smartphone apps, we’d have a paradigm shift. There’s debate about whether or not product lifecycles have actually shortened, but it’s clear that the single-product assembly line is becoming a thing of the past.  Multi-model production is more and more the norm. Conveyance that’s designed around a single product or set of products is inherently expensive to change. We’ve seen that for decades in automotive manufacturing, as most automakers scrap thousands of pounds of conveyor metal for every major model change. Since they’re not physically attached to the building, AGVs are more suitable for multi-model and periodically changing assembly lines. Automated guided vehicles can be refixtured, relocated, and reprogrammed to handle a variety of products.] 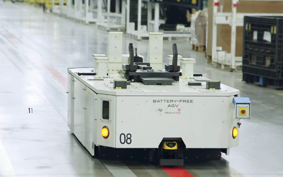 Flexible fixtures allow AGVs to handle multiple products[/caption] Automation that Protects the Operator There’s no stopping the forward motion of automation in manufacturing. Our customers continue to demand solutions that require less manual involvement in building products, managing processes and maintaining systems. At the same time, not everyone wants or can afford a line of robots for every assembly line. 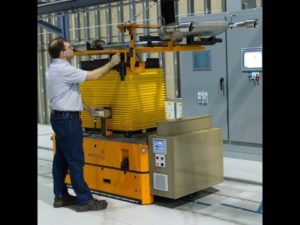 Onboard power for lift and rotation protects operators[/caption] AGVs offer automation that supports and protects the operator, with ergonomic lifts and product positioning, configurable safety zones to eliminate collisions, removal of trip hazards, and a quieter work environment that facilitates better communication between workers. Software Rules the World In a traditional conveyance world, chains and plates and miles of metal dominate the assembly line. With AGVs, software and controls play the primary role. With onboard PLCs, AGVs can interact directly with a manufacturing execution system, allowing the integration of error proofing, traceability, part kitting, and more.

Asynchronously Indexing AGV Assembly Line[/caption] For example, on an asynchronous multi-model assembly line, an AGV can refuse to advance until all error proofing checks are complete. If an error is deemed unresolvable within takt time limits, the AGV can re-route to a repair track. Traceability and OEE systems will identify that the product has moved off the main line and log the fault that required the diversion. Part kits will be adjusted ahead to address the change in the build schedule. The AGV becomes an intelligent component of the entire system, with the ability to engage with the plant MES, rather than a “dumb” mechanical chain device.

Even with changing trade agreements, very few large manufacturers can afford to limit themselves to a one-nation market. Currency changes, market demands, regulatory environments and more can impact the decision on where to build products. For example, a heavy equipment manufacturer had been building vehicles in Japan. It provided ready access to markets throughout Asia, where they had heavy product demand. But when demand in those countries declined, they chose to move their plant to another country where their market was growing. Instead of digging pits in the floor and installing rows of chains, they chose battery-free AGV conveyance. With almost no monuments, they’ll be able to easily move this assembly line to another location in the future if the market changes again.

Sustainability is a way of life

According to a 2016 Pew Research study, support for U.S. environmental regulations varies widely by state and is largely a function of each state’s primary industries and economic health. But irrespective of the U.S. regulatory environment, sustainability appears to have staying power in the manufacturing world, driven by worker demands for a cleaner, safer environment, and by interaction with international markets which have stricter environmental impact requirements. Chain-based conveyors consume a great deal of raw materials in their creation, scrap and rework, as well as requiring toxic chemicals for lubrication and cleaning. Manufacturers who want sustainable solutions are taking note. To be fair, AGV batteries have a negative environmental impact as well. These batteries are typically created in countries with minimal environmental regulations, as their toxic chemicals create a significant hazard for the people who build them and dispose of them. Inductively powered battery-free AGVs are a good alternative for companies looking for an environmentally friendly automated guided vehicle.

The Floodgates have opened

There’s been a sea change in assembly line AGVs.  We’re even seeing companies with millions of dollars in chain-based conveyance move to AGVs. As this trend continues to advance, we see manufacturers gaining unprecedented flexibility that will allow them to quickly respond to market changes in a way that’s smart, cost-effective, and safe.

Mark Sobkow is Vice President of Manufacturing Solutions for RedViking Engineering. With over 20 years of experience in factory automation for automotive, aerospace, and defense, Mark has seen major transformation in manufacturing methodologies and tools. Mark’s team manages the implementation of RedViking’s Wingspan® battery-free AGVs.