This post originally appeared in Aerospace Manufacturing and Design. A Department of Defense customer tasked RedViking to modernize an existing bank of more than 20 test stands used to dynamically assess the performance of helicopter transmissions, primarily those used in Apache and Blackhawk models. The existing test stands were 20-to-50 years old and had been built with single-purpose functionality. This resulted in constantly increasing maintenance requirements for the customer, excessive power consumption, and overloaded plant floor space. The test stands lacked readily available spare parts, required unique training, and did not produce the desired level of data for analysis. When a unit test was required, the test article would be built up and dressed within the envelope of the test stand, fully connected, tested, disconnected, and removed from the work cell. This procedure resulted in extremely long downtime, which coupled with the age of the equipment and the excess power used by the older equipment, presented RedViking engineers with a series of hurdles.

New testing system requirements included better compilation of test data, automatic closed loop operation of the machinery, true speed and torque measurement, a local test executive as the main operator interface to the test machine, and a standardized control platform for easier cross-training on the equipment. The customer targeted a goal of three to four tests per working shift versus the outgoing one test per shift. RedViking engineers determined that a series of five flexible test stand designs was sufficient to replace the 20 obsolute machines. 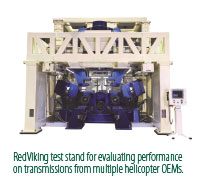 Engineers designed a series of workpiece carriages, allowing the units under test (UUT) to be mounted and staged outside the envelope of the test stand and then brought into the work cell for faster connection, test, disconnect, and exit. RedViking terms these devices transportable test fixtures (TTFs), which automate shaft connections, clamping and positioning, and provide 360° access to the UUT. This design provides significantly greater efficiency and a safe and ergonomic operator environment. Hours of test setup time were reduced to minutes. RedViking Controls and Software Manager Jason Stefanski and his team devised a new, modular software system and common human machine interface (HMI) platform for the test stands, with a common user interface and plug-in architecture, common function blocks, I/O coding, and CAT 4 safety functions. This design approach allows the software to be configured to accommodate the various transmission models being tested. Once the test article in the TTF is automatically positioned and attached, RFID tags on the TTF – used to identify both the article and the test profile configuration – communicates them to the test executive. Test profiles are generated and stored offline, with modifications made by the customer’s engineering staff outside of the test cells. Test profiles are then linked to the UUT type and model data. The main software feature of the test machines is the ability to execute a fully automated, repeatable, and traceable tests. To provide this functionality, RedViking developed a test sequence set (TSS) editor, allowing all parameters to be set by the customer and downloaded to a test executive from a localized laptop – thus eliminating the need to modify validated machine code. The TSS editor allows the customer to easily modify future or existing test profiles. 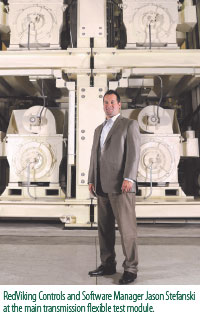 Siemens regenerative braking technology allows a system to recover power, minus the parasitic losses. Conventional dynamic load testing requires loading to occur via an eddy current or fluid brake system, which requires additional energy, maintenance, and up-front capital investment. In industrial environments, according to Siemens, Sinamics regenerative drive technology can enable energy savings of 40% or more. A common DC bus architecture allows for only one AC to DC conversion in the motoring direction, and the regenerative braking power goes straight to another inverter which is motoring via the common DC bus link. This method eliminates two conversion points where energy would be lost. In addition, the common bus solution paired with the active front end (AFE) has the ability for power factor correction, which will further increase the overall savings of a common bus system. All AFE drives allow for unity power factor and low total harmonic distortion (THD) that meets IEEE 519 harmonic standards. RedViking estimates that a test on the Main Transmission Flexible Test System, while running at full capacity, will cost approximately $400 less per hour to operate than current comparable systems – approximately $500,000 annually.

Siemens Industry Inc. supplied its high-performance asynchronous Simotics 1PL6 and 1RN4 motors, the largest being 3,000hp, to power the mechanisms on the test stands. When in operation, these motors simulate the power generated by the helicopter’s jet engines and the loading of the main rotor and tail output blades. This allows the military to test the helicopter transmission components to the full speed and torque requirements with very precise closed loop control. On the Tail and Intermediate Gearbox Flexible Test Module, engineers determined that two Siemens Simotics motors were less expensive and more efficient than the previous test stand’s gearbox design. This solution involves multiple motor connections to an output variable frequency drive (VFD) with auxiliary connections, eliminating the need for additional VFDs. 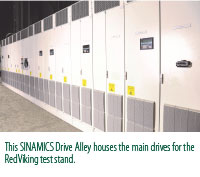 Stefanski notes that RedViking chose Siemens because of its global support structure combined with U.S. manufacturing. RedViking prides itself on designing and building systems in the U.S. and seeks out vendors who build their products here as well. Joshua Gibbs, RedViking manufacturing coordinator, comments, “We knew we were building these test stands to validate the performance of military helicopters that see wartime action. We take it very personally at RedViking to ensure these systems protect man and machine alike, as well as provide the ultimate in test validation.” RedViking engineers further note that the substantial energy savings and operational efficiencies realized by the customer gave their team considerable pride of accomplishment on this project. RedViking currently performs both Department of Defense DO and DX production priority rated contracts for the military and its subcontractors.