Pruning the Roots and Vines from Aerospace Manufacturing

An induction power source that eliminates cords and cables promises to cut production time up to 30%. 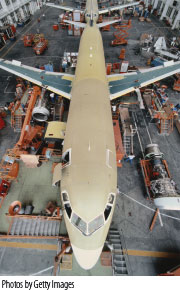 For decades, there was only one way to build fixed-wing aircraft. Each plane was built in one place, and all of the parts, tools, and operators arrived in sequence, according to plan. Today, many airplane manufacturers use an assembly line approach, where planes spend hours or days indexing through stations sequentially or moving slowly through a production area, pulled by battery-powered automated guided vehicles (AGV) also known as tuggers.

As the planes move through a station, they are unhooked from all of the cables and tool connections at that location, and then reattached to new cables at the next station in the line. The process of removing and reattaching air and electrical cables – referred to as roots and vines – can take almost as long as the assembly process for each station.

A major aircraft manufacturer is currently evaluating technology that will enable the cables to travel with the plane as it’s under production, eliminating the roots and vines that now anchor a plane to a station. This new approach will use battery-free AGVs for conveyance, communication and power, and will significantly reduce costs.

Battery-free AGVs use inductive power transfer (IPT®), a continuous source of power, conveyance, and communication. Providing a constantly available power source without the unpredictability of battery energy, these AGVs can carry and power the air compressors and electrical connections for all of the tools currently anchored to roots and vines.

The manufacturer estimates that eliminating those connections on an indexing line will reduce production time by approximately 30%, based on the average time it takes to attach and reattach all of these cables.

When aircraft manufacturers had to produce one plane per week, a central production location worked fine. Even a slow moving assembly line with a similar approach was acceptable when quantities were low. 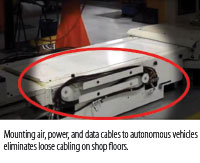 However, as volumes increase, new production technologies must be implemented. In addition to time and labor savings from eliminating roots and vines, inductively powered AGVs support higher production quantities by:

Eliminating battery and power management from the assembly process: As production volumes grow, demand on batteries increases and their life decreases. With decreased battery lives come disposal challenges as well as requirements for spare AGVs and batteries.

Improving efficiencies with always available air and electricity for tools: Rivet guns, torque guns, lighting, and more can be continuously available during production. Workers don’t have to wait for connections to be reattached before they can use their tools.

Creating a safer work environment: Tuggers and cables being dragged along with the aircraft can cause trip and collision hazards, which increase as the line accelerates. Battery-free AGVs have integrated configurable security sensors to avoid collisions. They move quietly on a smooth surface, and carry their cables with them to reduce trip hazards.

The future of aircraft production

As long as there is a predictable path for assembly, IPT is a cost-effective method of providing intelligent conveyance and power throughout the manufacturing process.

Inductively powered, battery-free AGVs use data and communications cables set into shallow floor channels less than 2" deep. The cables are clipped together, laid into the channels, and then covered with epoxy that is sanded smooth for a flat floor finish.

A master control panel communicates wirelessly with the AGVs to manage flow and processes. Changes to the line path are managed with software and controls and can be completed before the line path or processes are changed. The AGVs are proved out in advance on a test track, and the process of laying new or additional cables is typically done over a weekend. The installation and change process is simpler and less expensive than using chain-based conveyance or adding a fleet of battery-powered AGVs.

In the near future, battery-free AGV’s will have automation to help build the subassemblies, deliver them to the aircraft, locate where they need to attach to the plane, and move them into position for final assembly. It will appear as if the components are moving themselves into position to create an aircraft.

Complex parts such as jet engines, landing gear, and galleys will all be built with automation and tools powered by the AGVs’ inductive power transfer source. Using positional locating software, the AGVs will then transport them to the aircraft’s final assembly area, where IPT powered lifts and automation on the AGVs will move the assemblies into location to be attached to the plane.

The AGVs will power the tools, automate the assembly process, interact with the MES and other production systems to communicate work instructions and measure quality, and finally converge into the aircraft’s final assembly location where they will position and automate their installation into the plane.

Long a fixture in markets where resource constraints have impeded production capabilities, battery-free AGVs are being implemented in new ways in aerospace production. As volume requirements increase, this technology has the potential to significantly reduce the amount of hours required to build an aircraft, while integrating with factory intelligence to improve final quality.

---------------------------------------- Rod Emery is Vice President of Assembly and Integration Systems at RedViking. He is a graduate of the University of Michigan, a recipient of the William J. Branstrom Award, a licensed Professional Engineer and an avid fisherman.  RedViking is headquartered in Plymouth, MI and has engineering and customer support centers worldwide. Want to learn more about eliminating roots and vines from production?  Contact Rod at remery@redviking.com, or 734.454.0500.