What is a smart edge device?

"A smart edge device is something that’s able to communicate one or many plant-floor protocols in a way that isolates that network and traffic from the Internet," says Greg Giles, executive director, MES/Argonaut at RedViking in Plymouth, Michigan. "Sometimes data can be processed on the edge device; sometimes the edge device can simply be a pass-through. In both cases, it’s responsible for passing information to an enterprise- or cloud-level server." The edge device that RedViking uses as part of its Argonaut Manufacturing Performance Platform is called a Spearhead. "Sometimes these more complex versions of a Spearhead are incorporated into a hardened HMI or drive some other type of external display," says Giles. "The simpler implementations are usually small devices without a display." 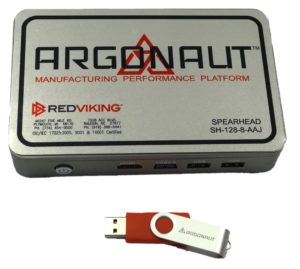 Smart edge devices perform information computing, such as data gathering, data storage and analytics, at the device level, says Mike Pantaleano, global business manager—analytics & cloud at Rockwell Automation. "These devices may have cloud gateway functionality, but what truly makes them smart is their ability to manage data and help drive decisions locally," he says.

An edge device performs a mission-critical role in production at the edge, but a smart edge device takes this a step further by continuing to reliably function while offering secure enhanced access, control and visibility into that edge function and edge devices. Smart edge devices can be used for both the control and monitoring of industrial machines and equipment, notes Nick Butler, Sr., group manager, data acquisition & control product marketing at National Instruments. "The purpose of the edge device is to make the asset itself smart," he says. "This is done by connecting the asset to the network and allowing the asset to sense and react to its own operating conditions and environment. This results in assets that are not only smarter, but safer, more reliable and better performing."

"There are new IIoT devices designed every day," says RedViking's Giles. "We’ve had decades of experience customizing MES, incorporating multiple brands of controllers and software and networks, and, if you’re a very large corporation with millions invested in your legacy systems, you don’t have much choice but to keep recoding that black-box MES software. That’s the whole reason we developed Argonaut. It’s designed to be an anything-to-everything platform. It can receive data from any plant-floor machine or device and send it to anything that can receive an API call. Manufacturing companies won’t have to write new code for every new device or software application, and they won’t be tied to any specific type of equipment. Smart devices are important to the future of manufacturing data, but we believe that flexible software is just as important, if not more so." An important reason for building intelligence into an edge device is to off-load tasks from the central controller hardware and have the work done by the edge device, says Christian Fell, Posital-Fraba. "This can be achieved by using higher-level communications systems such as fieldbus or industrial Ethernet," he says. "These systems, which make use of local microprocessors or ASIC devices to manage the interface, take care of data communication tasks, such as data packaging, handshakes and error-checks, without burdening the central PLC or microcontroller." The two advantages to using a separate edge device for collecting and analyzing data are avoiding load on the PLC processor and providing a configuration paradigm that is geared toward data management rather than machine control, says ProSoft Technology's Keith Blodorn. "As it relates to machine control, the PLC is an edge computer," he says. "With the tremendous growth in machine analytics, some of these edge data collection tasks will surely fall on the PLC, while others will find better homes in other devices throughout the system." Smart edge devices, such as smart instruments, are especially important for process skids, where the system may be installed in a remote area or not connected to the main control system, says Michael Robinson, national marketing manager, projects, services and solutions, at Endress+Hauser. "Data and analytics from the smart instruments can be sent directly to a plant’s control systems or operators without involving the skid’s control system."

"Using our Argonaut platform, smart device data is captured on a Spearhead edge device and forwarded to a server or the cloud," says RedViking's Giles. "It’s all managed from a central location, with apps and updates deployed as needed. It’s efficient because it doesn’t require a plant-floor PC to run or an on-site engineer to perform updates. It’s secure because it uses TLS, token-based authentication." "One of the main advantages of choosing a software-plus-edge-device approach is that data and configurations aren’t lost in the event of some kind of interruption," adds Giles. "Data is sent from the edge device and stored centrally, so if the plant has some kind of hardware or network failure, they’ll be able to quickly restore normal operating conditions. All of the data and configurations are centrally managed and deployed." Another important benefit of smart edge devices is their flexibility and versatility. "The performance characteristics of a smart device can be largely defined in software," says Posital-Fraba's Fell. "For example, the current generation of Posital's incremental encoders can be programmed to have a resolution—number of pulses per revolution (PPR)—anywhere between 1 and 16,384 PPR," he says. "There is no need to make mechanical changes to the device. This is useful for system designers, since they can specify exactly the performance characteristics they need, without compromise."

Past, present and future

“We used to install these systems and effectively forget about them for years,” notes Daniel McGinn, director of business development, SecurePower—IT Business at Schneider Electric. "In an open and connected environment, edge infrastructure needs to be managed and maintained in much the same way as IT systems, but with additional consideration, since we are talking about physical systems that can cause harm to themselves or product or even people if not managed properly. Policies, practices and system architectures need to be aligned around these needs.” The future trend will be to push the data analytic engines from the edge devices down to the actual devices themselves, says Nathan Hedrick, national product manager, flow, at Endress+Hauser. "There are two objectives that the sensor and its associated data are fulfilling," he says. "First is to control the process, and that will need to be performed by a supervisory element outside the device, and, second, to ensure that the measurements and devices are healthy and performing optimally." These smart edge devices will bring the business thinking to the way your equipment runs and get a better outcome for your organization, says GE Automation and Control's Carpenter. "A whole series of apps will be available to be operated on the various edge devices," he says. "The creativity will be through the industrial community to deliver value-added applications. Find the app that works best for the application, download it and run it." The smart edge devices will help to fuel the app economy for control that doesn't really exist today. Security is the most important concern. “But you also don't want some errant app to adversely affect the way a machine runs," says Carpenter. "The rules for interacting have been defined," he says. "The deterministic side needs to be perfect all the time, and the smart-edge-device side uses dialog and negotiation to keep the operators and equipment safe and optimized." This is an excerpt from an article by Dave Perkon for Control Design. To read the entire article, click here.

Dave Perkon is technical editor for Control Design. He has engineered and managed automation projects for Fortune 500 companies in the medical, automotive, semiconductor, defense and solar industries.