Make your Machines do More

What is a flexible assembly line?

by Rod Emery, VP Operations for RedViking I define it as one that can handle a wide variety of products today and easily change to handle new products tomorrow. Processes, machines, conveyance, data acquisition, and information analytics can all be flexible. It’s important to note that flexibility in assembly line design doesn’t require a complete tear-out. Each existing station should be challenged to do more, and a great place to start is in test and inspection equipment. To begin, consider where you can make your machines do more through flexible hardware, software and controls.

To illustrate what I mean by assembly line flexibility, consider that, for many years, automotive exhaust suppliers had unique machines for welding, dimensional gaging, leak testing, and weld repair. With each new model year, all of their systems had to be scrapped or heavily modified to accommodate new parts. But today, they’ve consolidated machine functions and implemented a docking station architecture that has saved them millions of dollars in production costs. This approach can reap benefits for every industry. 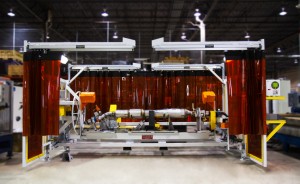 For example, if an exhaust part failed its leak test years ago, it was moved to a separate weld repair station. Today, as shown above, this machine not only tests for leaks, it includes ergonomic rollover automation for welding. Automotive exhaust suppliers have also consolidated testing of right and left part versions and other previously separate end-of-line operations. So, before you replace an end-of-line test machine, evaluate whether or not its functionality should be absorbed into another machine.

Another example of assembly line flexibility can be found in the docking station architecture, which isolates part-specific functions to a movable fixture. It’s widely used in automotive build, and is gaining adoption in other industries. 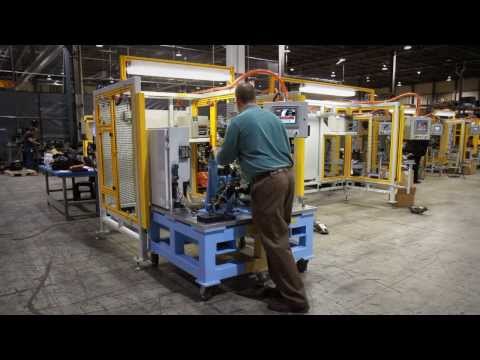 The image above shows an exhaust system dimensional gage being moved into a docking station. The dock contains the PLC, bar code reader, pin stamper and all components that are universal to their gaging operations. The wheeled fixture contains all elements specific to a unique exhaust part. The fixture is wheeled into the dock, attached with data and power quick connects, and is ready for operation. Using this station, when the automotive model year changes only the fixtures are changed, not the entire machine. We’ve used docking station architecture for many other quality machines, including helicopter powertrain test. It’s an approach that has wide applicability across multiple industries. Yet another flexible assembly line example was derived after having an engine manufacturer come to us with a requirement to automate inspections. Flexibility in this area is critical for this manufacturer since product types and quantities change quickly based on global market demand.

The associated vision inspection system shown above was designed to measure multiple parameters that had been manually or partially automated in the past. The machine itself is relatively simple, and provides real-time pass/fail information for in-line operation. By choosing to house most of the complexity in software and controls, they’ve achieved flexibility to inspect dozens of new engine variants, many of which were not planned into the original inspection system design. As can be seen from the examples shown here, when making inspection machines do more, it’s worth demanding that software and controls contribute. The bottom line is that you don't have to start from scratch to increase assembly line flexibility. Quality systems are a great place to start, so take a look at those to see if you can make your machines do more. Questions? Please give us a call at +1.734.454.0500.