Don't be an "Only" Customer!

Don't Make Yourself into an "Only" Customer

The manufacturing environment increasingly demands flexibility. Whether driven by changes in product design, production process or physical location, plant managers must have the ability to respond quickly, and this means making sure they never become an “only” customer.

We see this a lot in the manufacturing execution system (MES) world. A company starts out with an off-the-shelf software program that is close to what they need, usually has more than they need, and their IT staff modifies it. In the beginning, this typically only involves a few custom fields and interfaces, but after a year they have a heavily modified MES variant owned by no one else. Every system upgrade and every new machine requires going back to the team that modified that code. Without intending to, they’ve ended up with a custom MES on an inflexible platform. The result is that they’re held captive by the project’s programmers, who are the only ones who understand it.

Go where the programmers are

While we do plenty of modifications to off-the-shelf MES software, I believe a better option is to create the custom software you need on a widely used platform like SQL or MongoDB. There’s a wealth of programmers who understand those platforms and can modify your code. For mobile factory apps, even for something as simple as a barcode part tracker, it’s hard to go wrong with iOS or Android platforms. Most experienced MES integrators will be able to design around your requirements. If you choose an open architected platform, you’ll have ready access to programmers who can modify your code.

Another place we’ve run into this is in controls software and hardware.

We’ve been on projects where a team of hundreds (or thousands) was delayed by a small team of controls engineers who didn’t finish coding until right before the install.

Most machine builders and integrators have had the experience of being delayed because controls engineers have missed the mark. Unlike a machine or an assembly line under construction, controls software is invisible until it’s live, and if not done properly it can blow up the entire implementation timeline. This happens even for some of the world’s largest manufacturers. We’ve been on projects where a team of hundreds (or thousands) was delayed by a small team of controls engineers who didn’t finish coding until right before the install. There was no window of time to debug, and no one but those few programmers understood the code. The projects ground to a halt until the programming work was complete. This is one of the reasons why the Control Systems Integrators Association (CSIA) is so valuable. CSIA has developed best practices to make sure controls integrators are held to high standards. CSIA members share recommendations on controls hardware and software design, as well as excellence in program and project management. Choosing an integrator that is a CSIA member helps ensure that you’re hiring someone that will help you stay on track.

Non-standard controls hardware can cause similar delays. Many of our customers have a controls standard, but when they don’t, we like to stick with Siemens, Rockwell and, for certain applications, Lenze. By choosing widely used controls, you’ll expand the resource pool of people who are familiar with your architecture. You’ll never have a factory full of off-the-shelf machines, software and controls. The engineering profession is committed to developing new solutions to manufacturing problems, and that means new automation, processes and code. But by choosing flexible, modular, open architected options, you can keep from being anyone’s only customer. -------------------------------------------------------------------------- Rod Emery, VP Operations at RedViking, will present a seminar on "5 Principles of Flexible Assembly Line Design" at this year's Manufacturing in America Symposium. 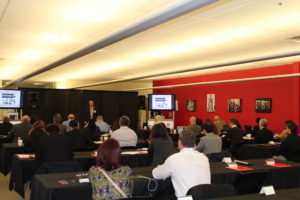 On Thursday March 24th at 11 am, Rod will talk about design concepts that we use to increase production flexibility and scalability: 1. Make your machines do more 2. Design for the future 3. Detach your factory from the facility 4. Don't be an only customer 5. Don't over-automate